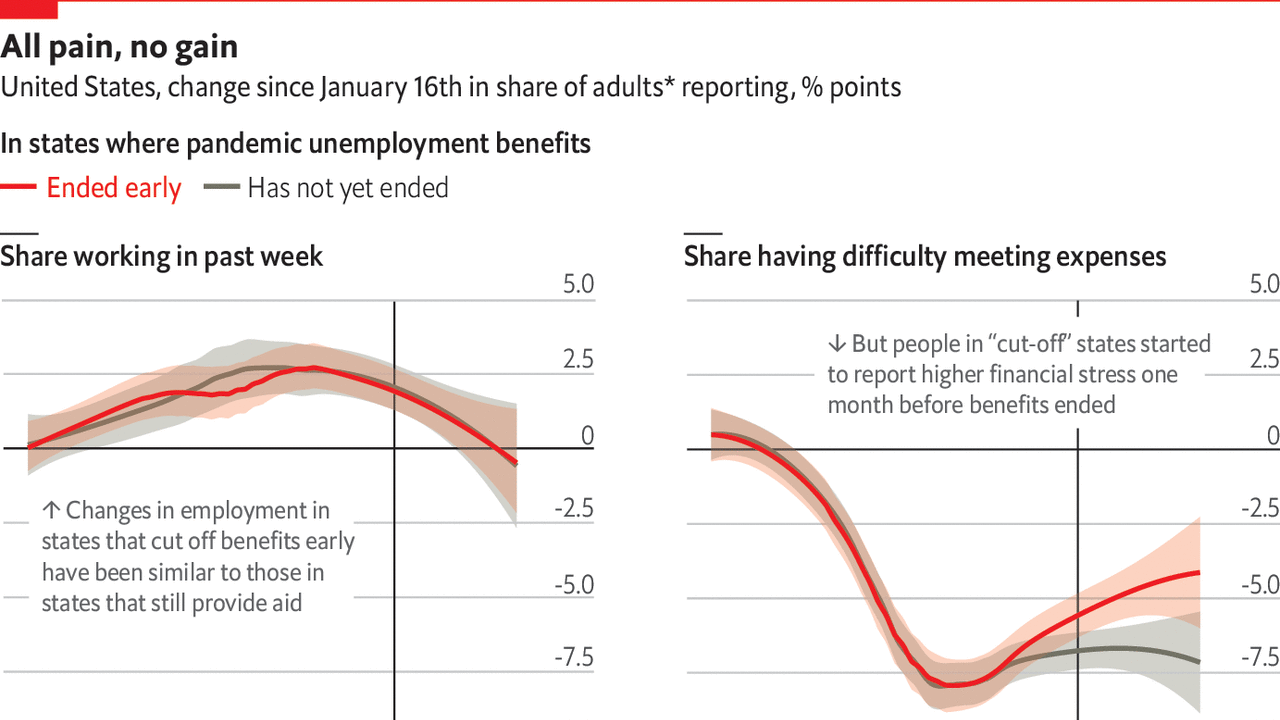 ECONOMIC THEORY predicts that as unemployment insurance becomes more generous, fewer people will work. Assuming that wages on offer remain constant, as the amount that people can earn without a job grows, the comparative financial gain they reap from working shrinks. Moreover, if insurance is sufficient to cover necessities such as rent or mortgage payments and food, the unemployed can pass over less desirable job offers while they search for one they like.

Hand-picked stories, in your inbox

A daily email with the best of our journalism

Measuring the size of the disincentive to work created by unemployment insurance is a well-studied area of economics. Most research has detected at least some effect in the expected direction, though estimates of its magnitude vary.

Among the core provisions of the $1.9-trn Covid-19 Relief Act that America’s Congress passed in March was the renewal of numerous forms of supplemental unemployment insurance, which were first approved a year earlier. Federal Pandemic Unemployment Compensation (FPUC) increased payments by $300 per week; Pandemic Emergency Unemployment Compensation (PEUC) extended benefits for recipients who had already exhausted them; and Pandemic Unemployment Assistance (PUA) provided aid to people who were not eligible for standard unemployment insurance and could not work remotely. The new policy extended federal funding for these schemes until September 6th, but let states choose to opt out. In June and July, 26 states, all but one with Republican governors, ended some or all of these benefits early, ostensibly in the hopes of encouraging the unemployed to return to work.

The contrast between states that cut off this aid and those that retained it makes it possible to estimate the impact of changes in unemployment insurance on the labour market. If ending PUA, PEUC or FPUC caused people to seek or find work, then employment performance in “cut-off” states should have been superior—either in the form of larger job gains or smaller job losses, depending on the national trend—to the results elsewhere. One study, which reviewed banking records from 18,000 low-income workers, found that in states that ended benefits, 26% of the people in the study were employed in August, compared with 22% of people in states that continued the insurance programmes. However, it also showed that affected workers gained on average only $14 per week in earnings after the cut-offs, but reduced their spending by $278 per week.

On August 20th America’s Bureau of Labour Statistics released state-level employment numbers for July, the first full month of data since most of the cut-off states ended the additional aid. So far, stopping benefits does not appear to have yielded the effect these states’ governors desired. Between June and July, the share of working-age people in the cut-off states who were employed rose from 53.3% to 56.0%, a strong gain of 2.7 percentage points. However, in states that maintained benefits, this share rose by an even greater 3.5 percentage points, from 53.2% to 56.7%.

Large-scale polling data also fail to produce evidence of superior employment performance in cut-off states. In April 2020 America’s Census Bureau launched the Household Pulse Survey (HPS), interviewing tens of thousands of people each week about how the pandemic is affecting them. One of the questions is whether respondents had worked in the past week. Using a statistical technique called “difference in differences”, we first measured how the share of people aged 24-65 in each state who said they were working had changed since January. Next, we aggregated these results into two groups, based on whether states had ended PUA, PEUC or FPUC early. Finally, we compared the two groups’ average changes in reported employment rates. The numbers were virtually indistinguishable: in months when employment rose in cut-off states, it climbed by a similar amount in all other states. The same was true of periods when employment declined.

However, the HPS did reveal an important distinction between the two groups of states for a different question: the share of adults saying it was “somewhat” or “very” difficult to pay for typical household expenses. Between January and May, fluctuations in this proportion were also similar in each group. But starting about one month before FPUC, PUA and PEUC cut-offs began, the share of respondents reporting financial hardship surged in the states that terminated the programmes early, climbing by an average of three percentage points once 50 days had passed since benefits ended. In all other states, the number did not change.

The fact that employment gains in states that cut off aid have been below average so far does not mean that the bulk of economic literature on disincentives is wrong. The effects of the cut-offs could take longer to show up in the data. They could also be inconsistent across states due to variation in which programmes were ended when. There may also be other factors unrelated to FPUC, PUA and PEUC that boosted employment in non-cut-off states in July relative to cut-off ones: given that all but one of the cut-off states have Republican governors and most of the others have Democratic ones, the two groups differ in myriad other ways as well. Nonetheless, other studies have also shown small or entirely undetectable disincentive effects from supplemental unemployment insurance in America during the pandemic. New economic models may be needed to account for the strange times we now live in.

Correction (August 24th 2021): An earlier version of this piece wrongly claimed that a study by Kyle Coombs and co-authors of banking records reached a conclusion about the overall economic effects of unemployment insurance top-ups. They found effects on spending but did not study broader consequences, such as on GDP or productivity. Sorry.