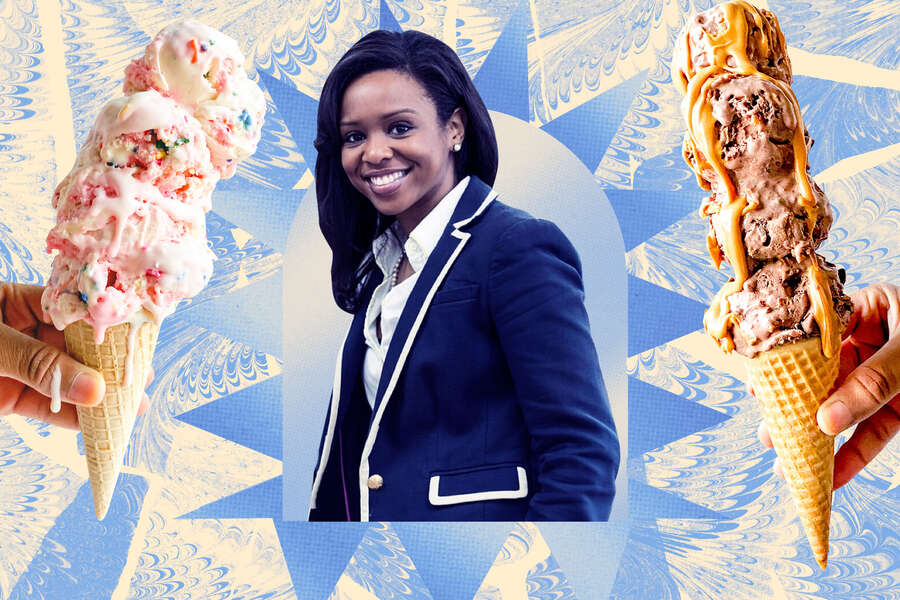 The flavor chemist also uses her passion to advocate for young kids in the STEM field.

Photo by Jeff Miller/UW-Madison; Design by Grace Han for Thrillist

St. Louis native Maya Warren first made ice cream when she was six years old. She remembers ripping open the packaging of a super colorful plastic ice cream maker, eager to get a taste of it.

But never did she think in her wildest dreams that she’d one day turn her childhood sweet tooth into what has to be the coolest job ever: an ice cream scientist.

Years after leaving her hometown, Warren attended college to major in chemistry, which at the time was preparing her for a future in being a high school chemistry teacher. However, after realizing teaching in a traditional classroom would be too restrictive for her, she then looked to sports medicine, but did not find fulfillment in that field, either. Then a chance viewing of a Food Network show changed her entire trajectory.

“One day in October of my senior year in college, I was watching this show called Unwrapped,” she remembers. “They went into a flavor chemistry lab where they were flavoring soda to taste like traditional parts of a Thanksgiving meal, so they had green bean casserole-flavored soda, and mashed potato and gravy-flavored soda, and cranberry sauce. I was like, ‘What are these flavors? No way these can be good.’ But, as weird as those sounded, I was so intrigued. I thought I could become a flavor chemist.”

After gaining more experience in food science, including interning at a cereal company, she realized at the age of 21 that she wanted to go back to her first love of ice cream.

“Once I realized it and connected it all the way back to that little six-year-old girl, I knew that indeed, that’s exactly where I’m supposed to be. Someone asked me recently, ‘Have you ever been in love?’ And I said, ‘I’m in love with ice cream,’” she says with a laugh.

She went on to earn a PhD in food science from the University of Wisconsin-Madison and, in addition to working internationally as an ice cream and frozen aerated dessert consultant, she then worked in research and development at Cold Stone Creamery’s headquarters in Arizona where she created fun new flavors for its locations around the globe. In her day-to-day, she uses chemistry and physics to create flavors that not only taste good, but also are able to be eaten properly in a frozen state.

One of the ways Warren continued teaching during the pandemic was through her Instagram Live series she started in May 2020 called “Ice Cream Sundays with Dr. Maya.”

“I started [the series] because I saw that a lot of people were at home making bread, like banana bread and sourdough bread. I was like, ‘Woah, hold up? Why aren’t people making ice cream?” she says. “Ice cream is a comfort food, it brings people together, it makes you happy. We need all those things right now because this is a tough time.”

After doing a poll on her account to gauge how many of her followers owned an ice cream maker, the consensus was an overwhelming “no” so she had to find a way to still connect with them and have them be able to participate. The solution was to focus on no-churn ice cream, which doesn’t require an ice cream maker. Ice cream recipes she taught included vegan cookie butter, strawberry cheesecake, and campfire s’mores.

“I was able to share what a food scientist is, what we look like, who we are, what we do, and what science really is—and how cool and fun it can really be,” she says. “I didn’t know that going in, but taking a step back and looking back at what I was able to achieve was exactly what I wanted to do without even knowing I wanted to do it.”

Her increasingly busy schedule put a pause on her series, but videos of each one can still be found on her Instagram. In the meantime, something you can look forward to is National Ice Cream Day on July 18, which is also the day that Ice Cream for Change is having its global sale. Founded by Warren and Mona Lipson in 2020, Ice Cream for Change was inspired by Bakers Against Racism and started in order to bring awareness to all of the racial injustices happening in America.

“The platform raises money for organizations that are leading the fight against racism and inequality, and those that support young kids, especially African-American kids, in the STEM field,” Warren explains.

Last year, the platform brought together about 130 ice cream makers and companies throughout the U.S., Puerto Rico, and Canada to raise $70,000.

“I’m really looking forward to being able to continue using ice cream as a medium that can make a change,” she says. “We don’t look at food that way, but ice cream is a very powerful tool, so I’m excited to be able to continue to push the envelope with ice cream, and to have people look at ice cream, not as just a sweet treat, but as something that truly does transform lives, and truly brings people together like no other food can.”

Kristen Adaway is a staff writer at Thrillist. Follow her @kristenadaway.